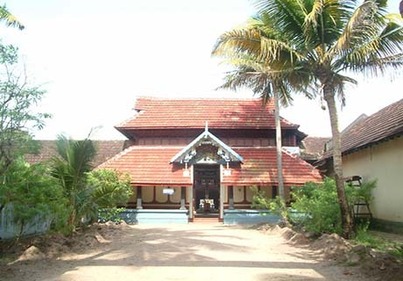 The Simhasan in the Srikovil has the idol of Venkatachalapathy on the first step,the Vishnu Padakam on the second step and Utsav idol of Sree Lakshmi Narasimha on the fourth step. The third step is vacant representing the original Ugra Narasimha idol which is now at A.N Puram Temple, Alleppey.

There is a Ganapati temple inside the Nalambalam. At the right side, there is small temple of Hanuman, which is now the Vrindavan of Srimad Rajendra Tirtha Swamy (samadhi 1799 AD), 11th Madathipathi, Kashi Mutt. Recently the Hanuman temple was moved to just outside the Srikovil at the Right Side. There is Naga Yakshi temple at the northeast corner.

Sri Raval Naickan, a young business man and an ardent devotee of Lord Narasimha, came and settled in Thuravoor near the Vadakkanappan temple. He visited the temple every day without fail and attended the Deeparadhana from outside. In those days GSBs were not allowed inside other Hindu temples. He was not liked by the poojaris of the temple. One day the poojaris closed the temple early and even refused to give him any prasadam. With breaking heart, he prayed to Lord from outside the temple. He heard somebody asking him to go westward. He followed a light moving towards West.

When he reached the location of the present temple, the light disappeared and he felt somebody telling him to have a prathista there. At that time two sculptors appeared there and Raval Naickan requested them to make a Narasimha Vigraha for him. They made a silpalaya (an enclosure) and entered therein to make the vigraha. Raval Naickan waited for sometime and later impatiently peeped into the silpalaya since he could not hear any sound from inside. He found two Vigrahas there (one Ugra Narasimha and one Lekshmi Narasimha) and the sculptors missing. However, the Ugra Narasimha Vigraha was not fully finished with tip of a finger of one foot incomplete. Raval Naickan believed that the sculptors were divine (Vadakkanappan and Thekkanappan) and constructed a small temple there for the Narasimha Moorthy. He also constructed his house near to the temple. In the begining, the affairs of the temple were managed by Sri Raval Naickan himself and later when he became aged, handed over the governance to Cochin Tirumala Devaswom in 1704 AD. Thuravoor area was then part of the Cochin state. A new temple and agrasalas were constructed during this period. The extensive land owned by the temple and financial assistance for construction of the temple were donated by the Maharaja of Cochin. The original pratishta was facing West. A peepal tree and the althara is seen even today at the west gate of the temple. It was later believed that the declining agricultural yield in the vast paddy fields between the temple and the sea (towards west of the temple) and heavy sea erosion was due to the drishti of Narasimha murthy and hence the new temple and prathista was made facing East. The temple was financially very sound and had vast landed properties spread in Thuravoor and Varapuzha.

During the persecution of Konkanis in Cochin state, many GSBs shifted to Alleppey which was in Travancore state. The Ugra Narasimha vigraha from Thuravoor also was shifted to Alleppey Old Tirumala temple (along with the Venkatachalapathy idol from Cochin) in 1792 AD and eventually was installed in Alleppey Anantha Narayana Puram temple in 1852 AD. By this time Thuravoor became a part of Travancore State. After the death of Raja Sakthan Thampuran, many went back to Cochin. The new Raja of Cochin realised the importance of the Cochin Venkatachalapathy idol and demanded it back but in vain. The Venkatachalapathy idol was clandestinely taken back to Cochin on the midnight of 7th Feb 1853. The members in Thuravoor severed the ties with Cochin temple. This resulted in infights between community members in Cochin and Travancore states for ownership and control of the Thuravoor Temple and its vast properties. The Cochin members filed a suit in Quilon Court in 1883 AD for this purpose. For some time, the temple was under a Receiver appointed by the Court. Later in 1895 AD, the Court decided that the Alleppey and Thuravoor temple belongs to the entire Community members (in the eight villages or Ashta gramas) of Travancore state. The Ashtagramas are Alleppey, Thuravoor, Shertallai, Purakkad, Kayamkulam, Quilon, Kottayam and Parur. Accordingly the Alleppey Anathanarayanapuram Thuravoor Tirumala Devaswom (AATTD) was formed and managed by elected members from the Ashtagramas. This Devaswom was very rich and initiated many educational projects. The Devaswom runs a High school and Teachers Training Institute near the temple at Thuravoor and a High School at Alleppey.

The introduction of Kerala Land Reforms Act in 1963 relating to the fixation of ceiling on land holdings, changed the fate of Devaswom and AATTD lost most of its land holdings making its financial position weak.

The temple owned a Gosala located next to the Elephant cottage until the late sixties and also had an elephant. The elephant of the temple was treated as a pet of the whole community. The most famous of the elephants was Gajendran which lived till 1970 AD. The elephant cottage is now non-existent and a Library and Reading room is constructed at this location. At present, the temple maintains a small Gosala located next to the Reading room on the south east side of the temple.

There are seven Vahanas in the temple, they are Garuda, Hanuman, Aswa, Chandra, Iravatha, Hamsa and Sesha vahana, and there is a wooden/silver palanquin.

The temple celebrates a 8-day utsav (arratu) festival. The arattu festival begins with thikodiayettem, and on the fifth day of the annual Arratu, Lord pays a vist to his devotees in the silver palanquin through the front of the temple and along the southern street to the nearby Vigneswara temple and then returns after Pooja and Uoonjal seva (swing) there and on the sixth day Lord pays a visit to houses in the north and then goes to circumvent the Arthikulangara Bhagavathy temple. On the seventh day Lord is taken out ceremoniously in the Aswa Vahana for Pallivetta to the mandapam at the back side of the Bhagavathy temple.This procession is the most biggest part of the Arratu festivals. On eighth day, at late night Lord is taken out in the silver palanquin to the Arattu kulam near the Bhagavathy temple for Avibhithsnanam (the Arratu). Lord is then taken to the Arattu manadapam at the center of the Arattu kulam on boat (Monchuve). After pooja and Snanam (bath), He returns to the temple early next morning and then the kodi is taken down.